On Sunday the 23rd of August, as part of Heritage Week, Limerick Riverpath Volunteers will be hosting an event dedicated to the Black Bridge in Plassey.

We will meet on the Limerick side of the bridge at 4pm. Thanks to the kind participation of Thomond Archaeological and Historical Society, we will have short talks on the history of the bridge, followed by a picnic at the Fisherman’s Cottages, so we can share information on the current status of the bridge and what might be needed to restore it. If you are interested in the past, present and future of the Black Bridge in Plassey, your presence would be most appreciated. There is great affection for the bridge, so we would like people attending – many of whom assist us in our efforts to clear the area of litter – to be as well informed and socially engaged as possible in their wish to get the bridge reopened.

The event is supported by the UL Environmental Committee.

We hope to see you there.
We can be contacted at limerickriverpaths@gmail.com if you need further details.

You can read more about the Black Bridge in Plassey here: The River Cleanup organised by the UL Kayak Club gave us an opportunity to join in. The UL Environmental Committee organised a clean-up, so we decided to concentrate on planning how to tackle the Himalayan balsam and replace it with edible plants like wild strawberries, gooseberry and raspberry bushes.

We planted raspberry cuts and shootings by the Boat House, and lots of wild strawberries in front of the Boat House and all along the foot path. We’ll be back to pull out more of the Himalayan Balsam – it is still young and difficult to distinguish from the other plants! Looking forward to the harvest in a year or so!

The “Incredible Edible” movement offers great inspiration for thinking about the gifts that the place around us can offer, if taken care of!

Here are a few pictures of the clean-up itself, posted by the UL Green Campus committee.

As part of Team Limerick Cleanup Good Friday action, we did our bit cleaning the canal banks on both sides from Clare Street to the Park Canal Bridge up to the railway bridge on the Rhebogue side. We were blessed with such beautiful weather!


21 people joined in, some of them friends of friends who were just visiting Limerick, some others long time supporters of our group. It was nice to see by passers stopping and talking to us- maybe because our high-visibility vests were so well branded! Well done everybody! Thanks to everybody who showed up and helped! 24 apple trees and 3 jostaberry bushes planted!

These are Ann Kirby’s photos from the event:

And some of Deidre Power’s photos below:

It was tough work – the soil was difficult do dig and it was wet, but we made it! Looking forward to the harvest in the years to come! 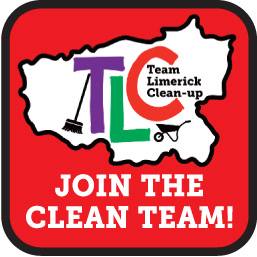 We are joining Team Limerick Clean-up (http://teamlimerickcleanup.ie/) for a couple of hours of work on the Canal Bank from the lock to the Park Bridge on Good Friday (3 April 2015).

The meeting point will be the Clare Street gate to the Canal Bank (behind Great Gas Petrol Station) at 2pm.

We had two meeting points: the UL Boat House and the Anglers’ Walk entrance. The group on the UL side was smaller, but they did great work! You can see their “capture” below. We worked along the bank, hoping to meet after a couple of hours. Unfortunately, the weather wasn’t great (drizzling, cold and chilly) and there was rubbish galore, so we decided to stop and call it a day. We regrouped on the Anglers’ Walk side for a photo. Someone in the neighbourhood must have called the guards seeing the pile of rubbish accumulating at the gate. Fortunately, they arrived at the moment of our glorious photo shooting – they drove past us up and down and left us alone.

We had great support from the Limerick City and County Council, who sent a truck to pick up the bags almost immediately after we finished.

A big thank you goes to our friends at Richmond RFC, who kindly provided us with tea and coffee and allowed us to clean up and get dry while having some home baked delightful cakes. Their new club building is impressive – they’ve done a fantastic job!

Thanks to generous support from a donor working with the Irish Seed Savers Association, we are getting a number of Irish native apple trees and we will be able to start planting fruit trees on the canal and Corbally side. Come and join us on Saturday, 28 February 2015 at 2pm!
The meeting point is the exercise fixed equipment on the Corbally side foot path. Adopt a tree together with your family and friends, and watch over it as it starts bearing fruit!
Here’s a satellite image of our orchard-to-be – the public areas along the north bank of the Park Canal and the high ground in the wetlands to the north of the fields. It is very muddy, which is good for digging but bad for clean clothes, so be sure to wear raingear and wellies! This coming Sunday, 15 February 2015, will be our first clean-up of 2015. We are planning to focus on the area from UL to the Anglers’ Walk entrance this time.

If anyone has a wheelbarrow available, it would be of great help.

If we get enough participants, we will split in two groups, one starting from the UL Boat House, the other one from Anglers’ Walk in Rhebogue.

The main meeting point is the Anglers’ Walk access path to the river bank at 2pm.